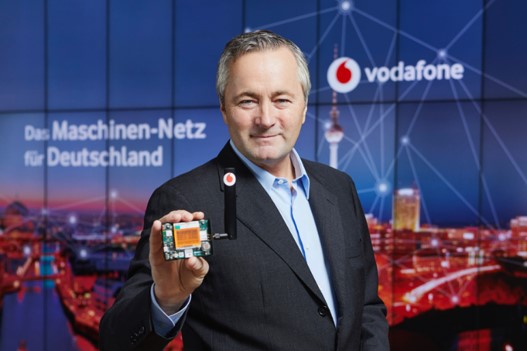 Vodafone is commercially rolling out new wireless network technology throughout Germany and creating a network for machine-to-machine (M2M) communication that can connect anything – from bicycle to freight container or water meter. The Düsseldorf-based telecommunications company is building the infrastructure to broaden the future of IoT connectivity. “M2M is the next chapter in the German digital transformation,” said Vodafone Germany’s CEO Hannes Ametsreiter. “Mobile communications gave us mobile phones, apps and messengers. The Internet of Things is giving us smart factories, smart clothes and smart cities. Now and throughout Germany.” Vodafone’s new network will go live in September. Over the next six months, around 90 percent of Vodafone’s LTE base stations will be upgraded for narrowband IoT technology. This nationwide upgrade will make new applications possible all over the country. For example, logistics service providers will be able to use NB-IoT to connect and monitor raw materials, parcels and containers along the entire supply chain and across all sites.

Any cookies that may not be particularly necessary for the website to function and is used specifically to collect user personal data via analytics, ads, other embedded contents are termed as non-necessary cookies. It is mandatory to procure user consent prior to running these cookies on your website.